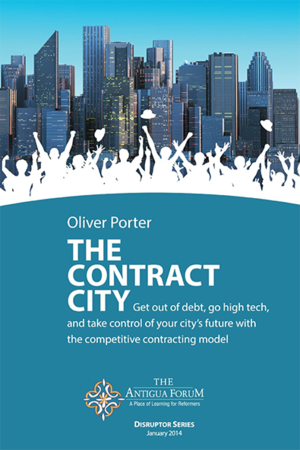 A Revolutionary Approach to Local Government.

In 2005 retired executive Oliver Porter created a functional city government for Sandy Springs, Georgia, in less than a year. He had no budget, no formal authority, and no staff except the volunteers he convinced to join him. Facing overwhelming odds, Porter pioneered a model in which city services are comprehensively contracted out to private firms.

Sandy Springs became one of the most successful cities of its size in the United States, with award-winning city services and public works but no debt or long-term liabilities.

In this book, Porter shows you how your local government can join the growing number of Contract Cities to get out of debt, adopt new technologies, and take control of your community’s future.

Oliver Porter developed the contract city model and has since been called the "metro maestro" and "father of cities". The first contract city he established enjoys the highest citizen-satisfaction rate in the United States. Today he continues to advise other cities around the world. In 2009, Reason Foundation named Porter Innovator of the Year. He has been profiled by The New York Times, CNN, and the Freeman. He is the author of three other publications on Public-Private Partnerships. 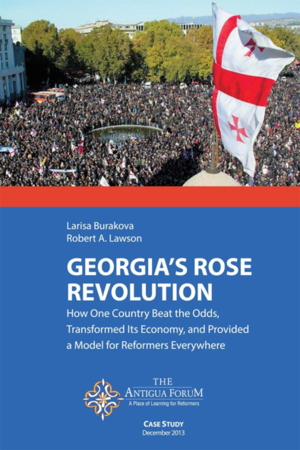 In 1992 after seventy years of Soviet rule, the small South Caucasus nation of Georgia began a slow and chaotic march to economic freedom. The most important market-liberal reforms began in 2003, after the Rose Revolution. Georgia massively cut its bureaucracy, privatized everything from government-owned hospitals to electric power plants, lowered taxes, and liberalized labor laws.

The significance of these reforms was soon noticed. The World Bank´s Doing Business report rated the country ninth in the world in ease of doing business, ahead of many far richer countries. The US Agency for International Development remarked that Georgia had made “the broadest, deepest, fastest business climate reforms of any country” over the last half century. Today, Georgia stands as a leading example of how a country can transform itself and obtain a market economy. This case study tells the story of how it happened, with lessons for reformers around the world.

Larisa Burakova is an economist at the Institute of Economic Analysis in Moscow and author of Why Georgia Succeeded. She is a consultant for the United Nations Economic Commission for Europe and lecturer at the Russian Presidential Academy of National Economy and Public Administration.

Robert A. Lawson holds the Jerome M. Fullinwider Endowed Centennial Chair in Economic Freedom at the O’Neil Center for Global Markets and Freedom at Southern Methodist University’s Cox School of Business. He is co-author of the widely cited Economic Freedom of the World annual reports, which present an economic freedom index for over 140 countries.

Privatization of Telecommunications in Guatemala

A Tale Worth Telling

In 1996, Guatemala adopted one of the most pro-competitive, market-liberal telecom laws in the world, granting property rights to spectrum and opening the market fully to competition.

Critics said that such a radical approach to reform would cause “chaos” in the market. It didn’t happen. Rather, competition surged, prices plunged, and consumers benefited.

This case study tells the story of how this reform came about in the face of serious doubt and significant opposition.

Wayne Leighton is professor of economics at UFM and executive director of the Antigua Forum. He previously spent ten years in senior advisory positions at the U.S. Federal Communications Commission and the U.S. Senate Committee on Banking, Housing, and Urban Affairs. Wayne is co-author, with Edward J. López, of Madmen, Intellectuals, and Academic Scribblers: The Economic Engine of Political Change.

Carlos Sabino is professor of sociology and history at UFM, and he has spent decades researching economic and political issues in Latin America. Among Carlos's acclaimed books are The Failure of Interventionism; Building Consensus for a Free Venezuela; and a two-part study of Guatemala’s civil war, Guatemala: The Silenced History. 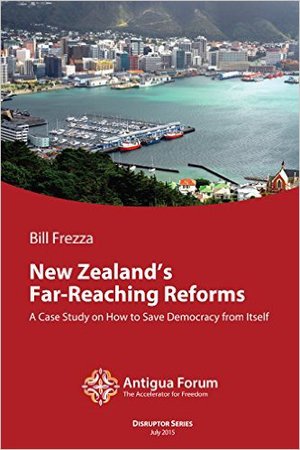 Bill Frezza is a former scientist, engineer, entrepreneur, and venture capitalist turned author and commentator. He hosts a weekly talk show broadcast on Bloomberg Radio, RealClear Radio Hour with Bill Frezza, sponsored by the Competitive Enterprise Institute. A one-hour, long-form interview program, RealClear Radio Hour emulates the sound, style, and production values of NPR but from a market-liberal perspective. In 2011 Bill was a finalist for the Hoiles Prize for Excellence in American Journalism for his work with RealClear Markets and Forbes.com.